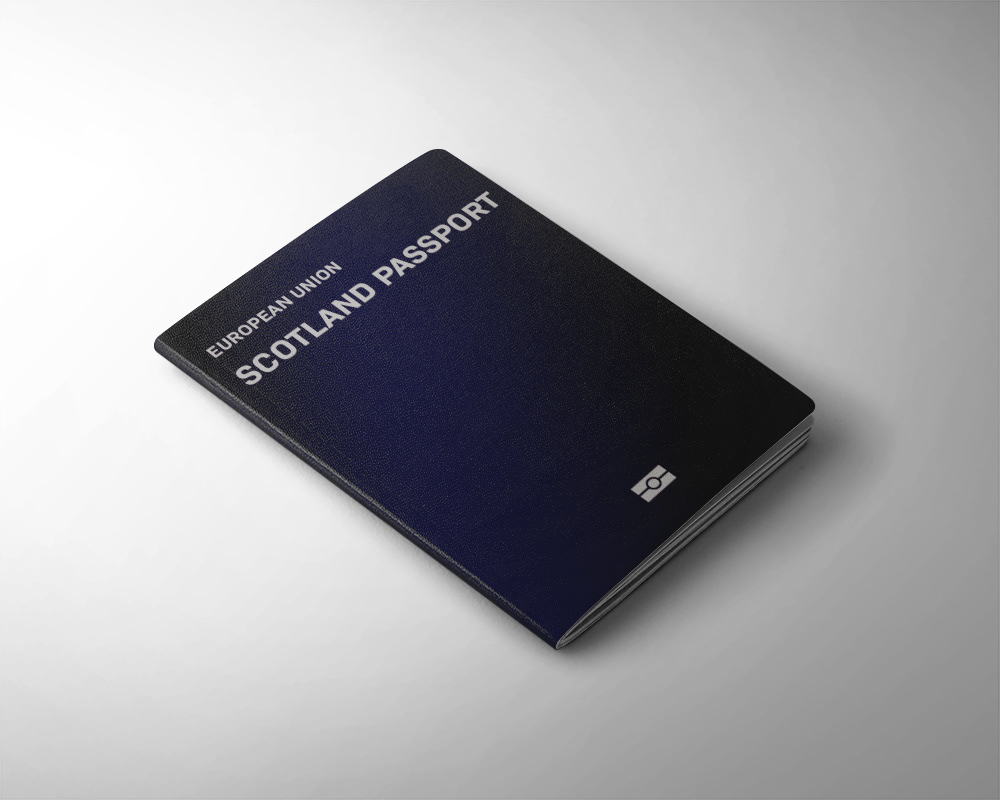 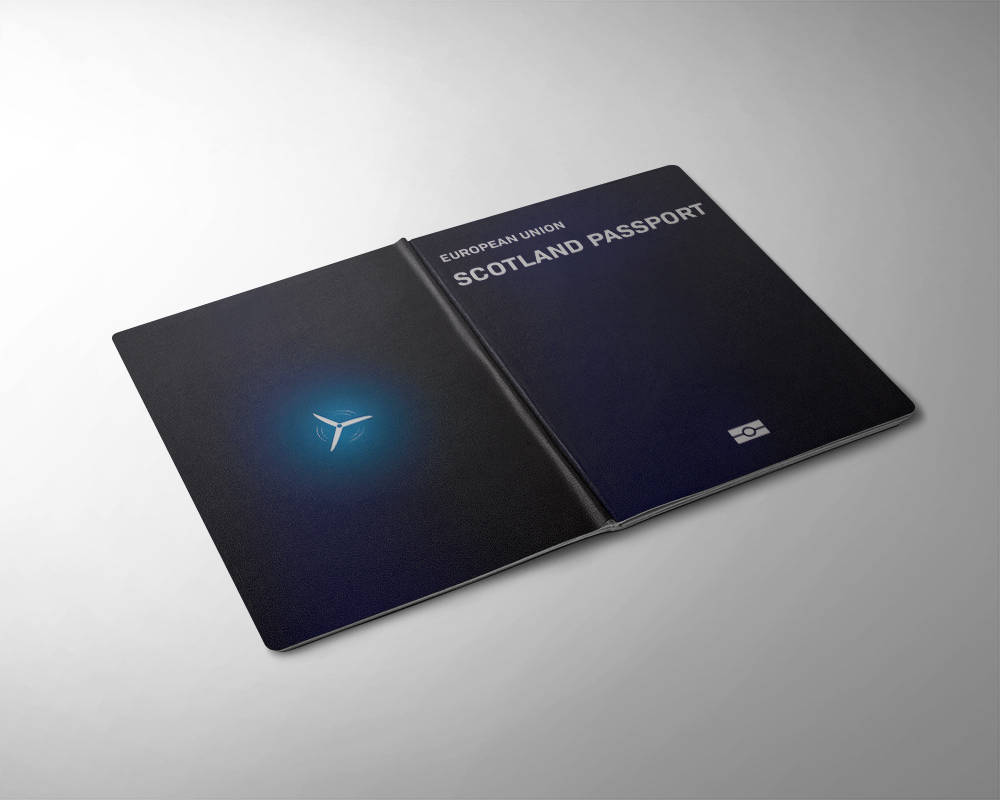 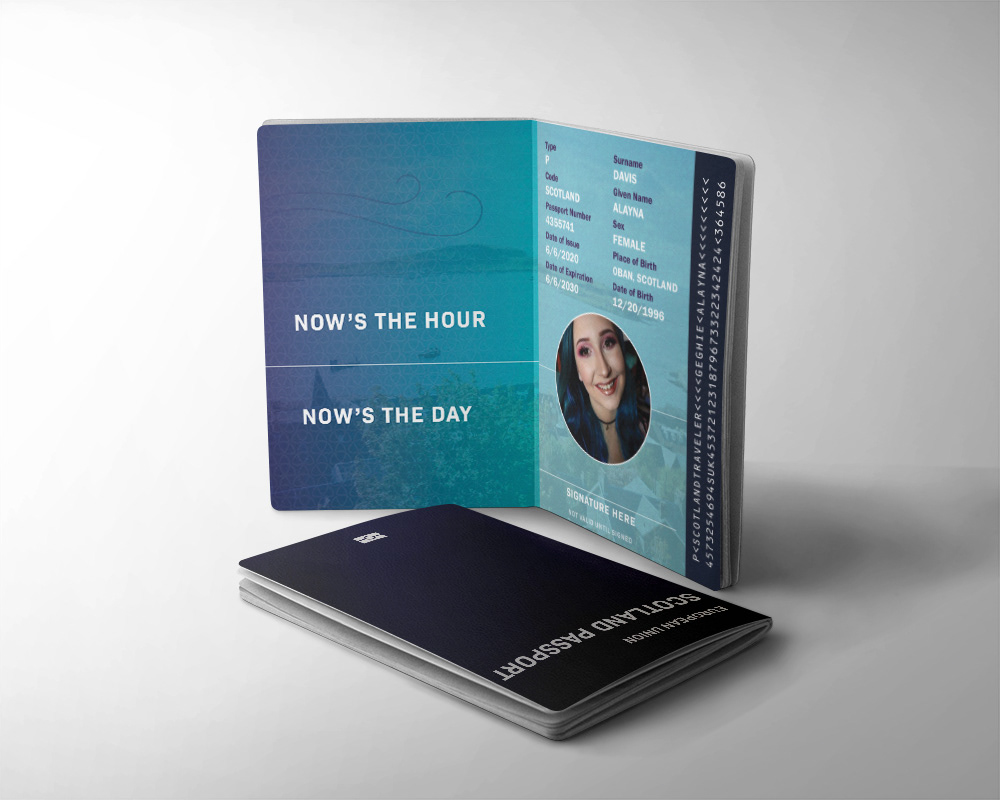 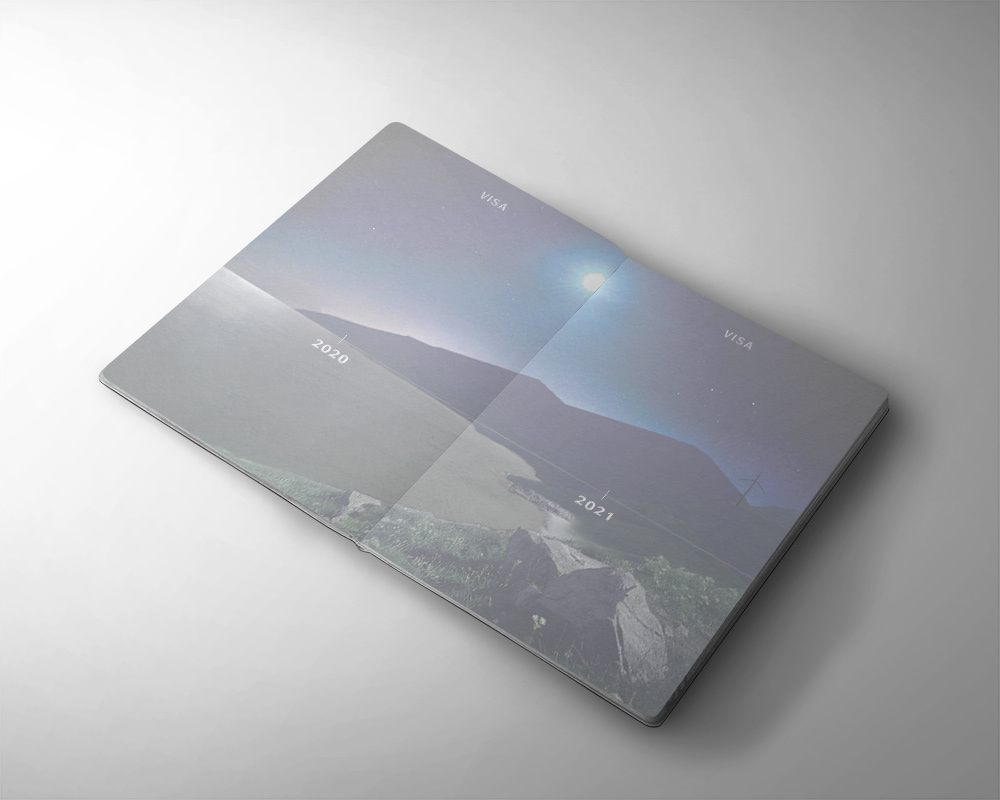 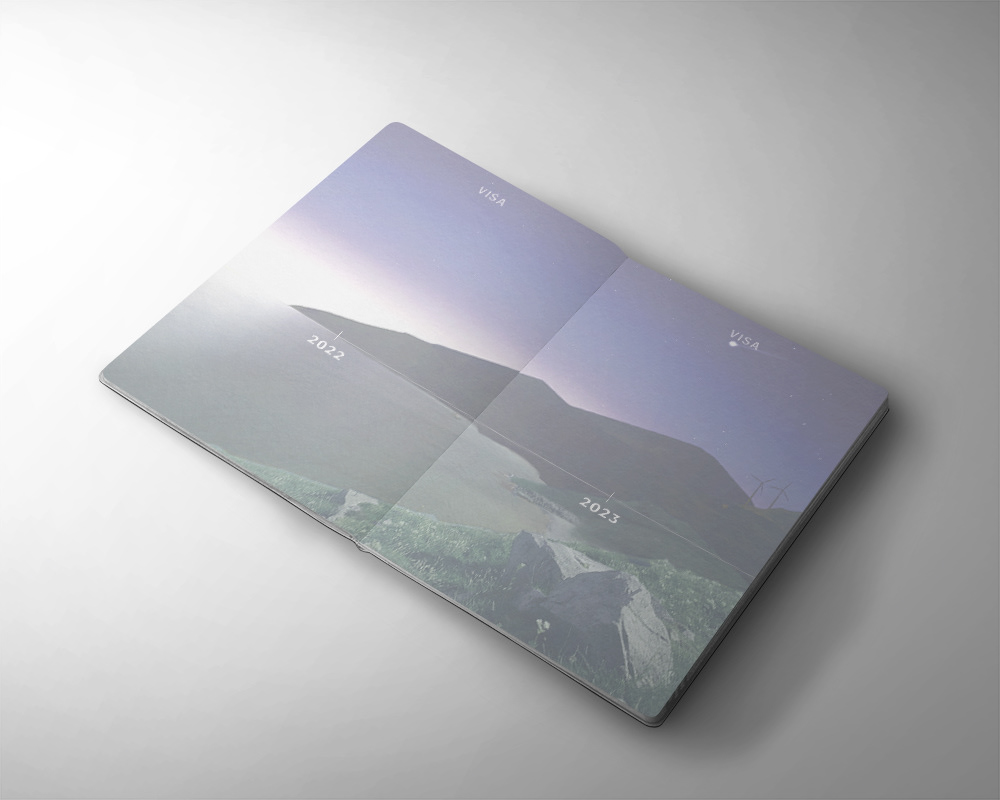 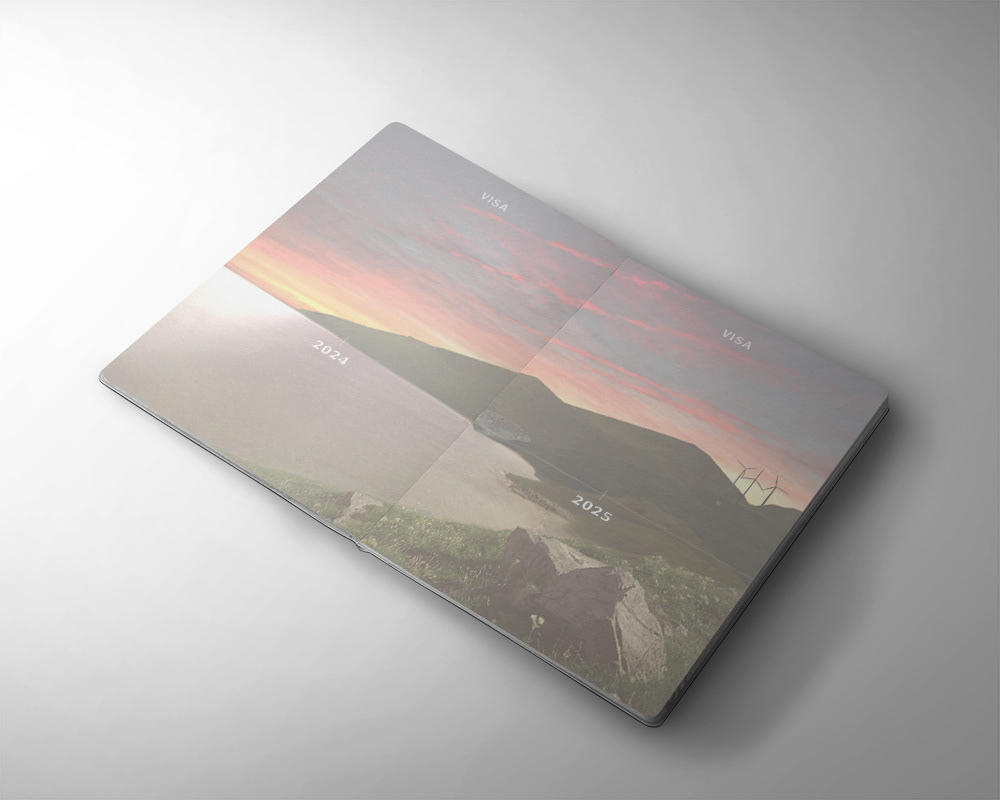 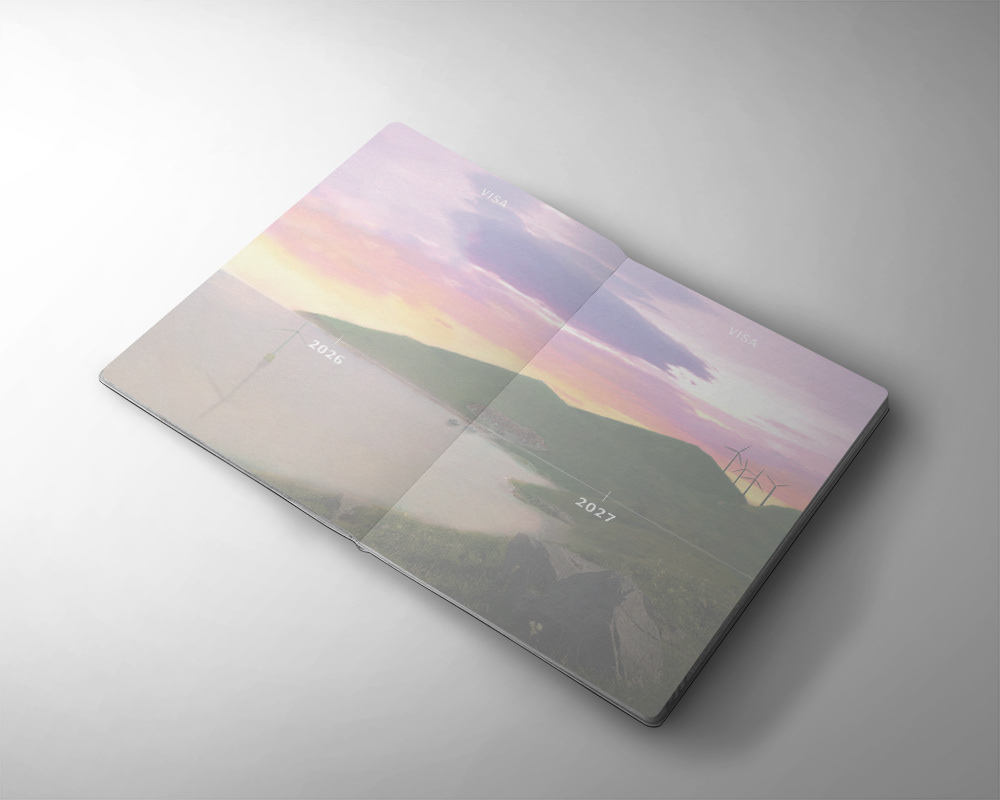 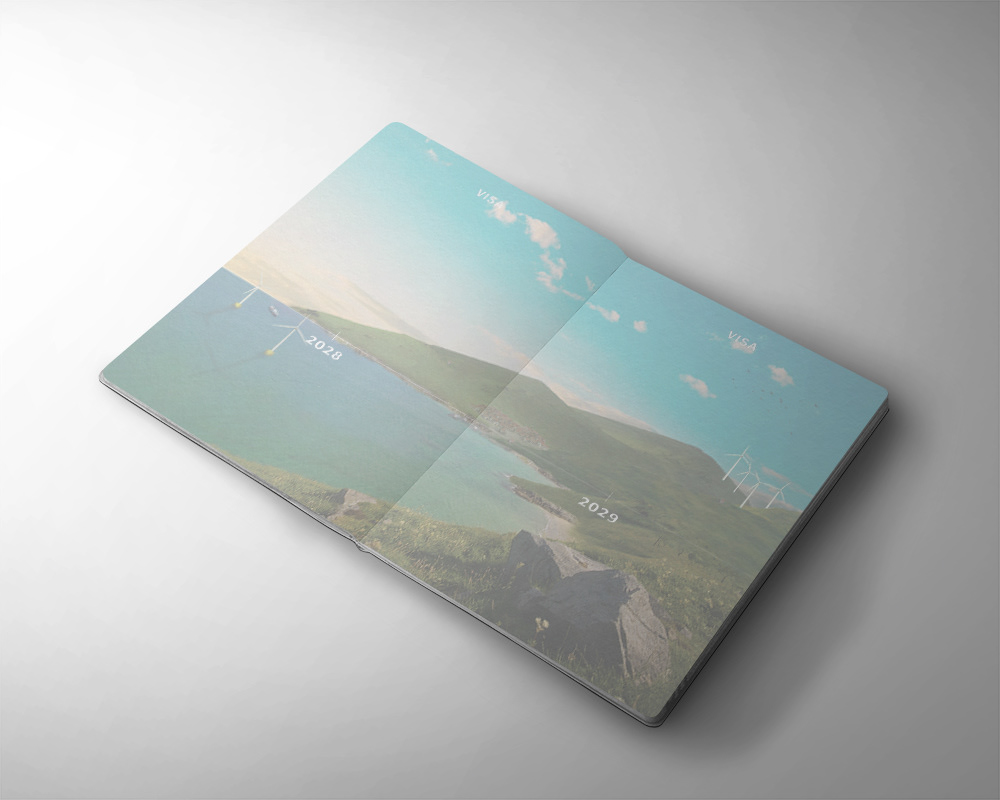 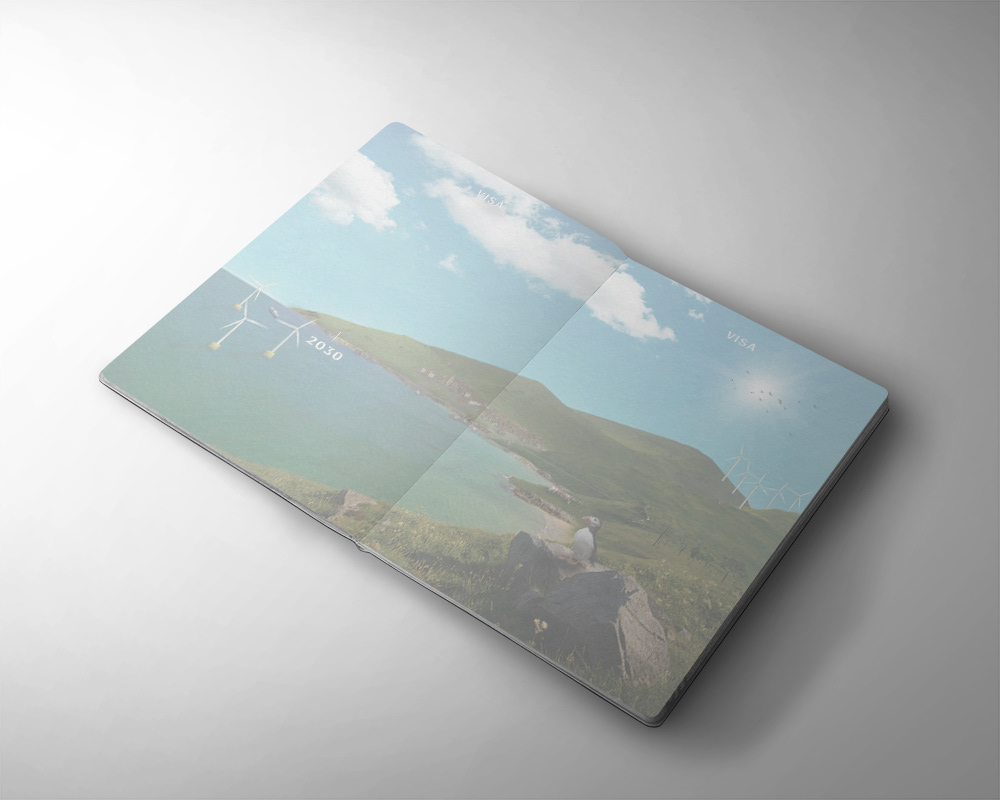 Country: Scotland
Concept Statement: Scotland has set a goal by 2030 to create 50% of its energy from renewable resources, mainly sourcing from wind turbines. This passport encompasses the benefits and change that Scotland will see happening to its environment over time.
Rationale
By the year 2030, our skies could be dark and withered, or could be blue and glistening, all thanks to using renewable energy. Scotland has set a goal by 2030 to create 50% of its total energy through renewable resources, mainly sourcing from wind turbines. By doing so, Scots will travel the Earth and proudly present themselves to other nations as the leaders in helping keep our Earth, starting with their own country, pristine and clean, and preserving the historic landscapes that makes Scotland so beautiful. The Office of National Statistics estimates that roughly 4.5 million citizens from the United Kingdom travel abroad monthly, this statistic including Scotland as well. Traveling with this passport in other countries will make a prominent statement about their own, encompassing the fact that Scot citizens are focused on bettering the Earth. This passport design visualizes this idea by showing the growth Scotland will have in a 10-year span after the issue date in 2020: the landscape implementing renewable energy, the population flourishing, commerce growing, and animals coming to the area. The paper used to manufacture this passport is 100% recycled material, and can be used over to make future passport documents once the user turns their old one in for a new one.
Once the user opens to the first page, they read a quote from the famous Scottish poet Robert Burns, “Now’s the hour, now’s the day.” This quote originally reads “Now’s the day, now’s the hour,” but reversing it abstracts how Scotland is reversing the damage pollution has caused to the environment by switching to renewables. The user’s place of birth can be seen behind the quote, including a small gust of wind abstraction to indicate the simple use of wind is bettering even their hometown. Directly beside the first page is the profile page of the user. The image of their hometown is connected over from the first page and is seen to be more flourishing here. The profile picture is seated on a white line that connects to the visa pages on the timeline; this shows that the person in the picture plays a key role to the change that is happening to their country over time.
The visa pages of the passport first open to an almost empty Scottish night scene with only one windmill on the horizon. All visa pages present a timeline at the center that go from 2020 (the issue date) to 2030 (when it expires).  As the passport progresses through time, it starts becoming lighter outside, with the environmental changes happening. By the end of the passport, it is pure daylight. The front of the passport, being Scotland’s national color, is in direct contrast to the passport’s first visa pages: dark and barren.  Once the user reaches the back of the passport, it visualizes a small windmill with a lighter blue coming from behind it; this represents the fact that wind energy is the key Scotland’s electricity source, but also to Scotland’s “bright” future—slowly overtaking the darkness of the page.
Although this renewable energy plan is wonderful for Scotland, there are those that claim that it could have drawbacks because of how much money it will cost the Scottish government to implement wind energy structures such as windmills and water turbines. The question is asked, “who will pay the funds?” by some people and is discussed that taxes may increase for the locals to cover the costs of infrastructure. The good news is that most Scots support the change to renewable energy, according to Ariel Bergmann and Nick Hanley. In their study, the primary reasons Scottish communities reported for engaging in renewable energy is because it strengthens the economy, decreases the carbon footprint, increases energy awareness, lowers energy costs, and much more. The positive impacts outweigh the negative impacts financially, and of course will balance itself out in the years to come as it gets paid off.
In conclusion, this passport will truly let Scots set a great example for the rest of the world in combating climate change by representing how their own country will change. The Scottish government has already stated that by the year 2030, 50% of energy will be produced by renewables, and The Climate Change Act in 2009 introduced legislation to reduce carbon emission by at least 80% by 2050 with an intervening goal of 42% by 2020. This means that this passport design could continue in concept well after 2050 and can be used long into the future to help push the message of going green. The future is looking bright in Scotland, and also for its people.

The Adventurer's Guide to Dungeons & Dragons